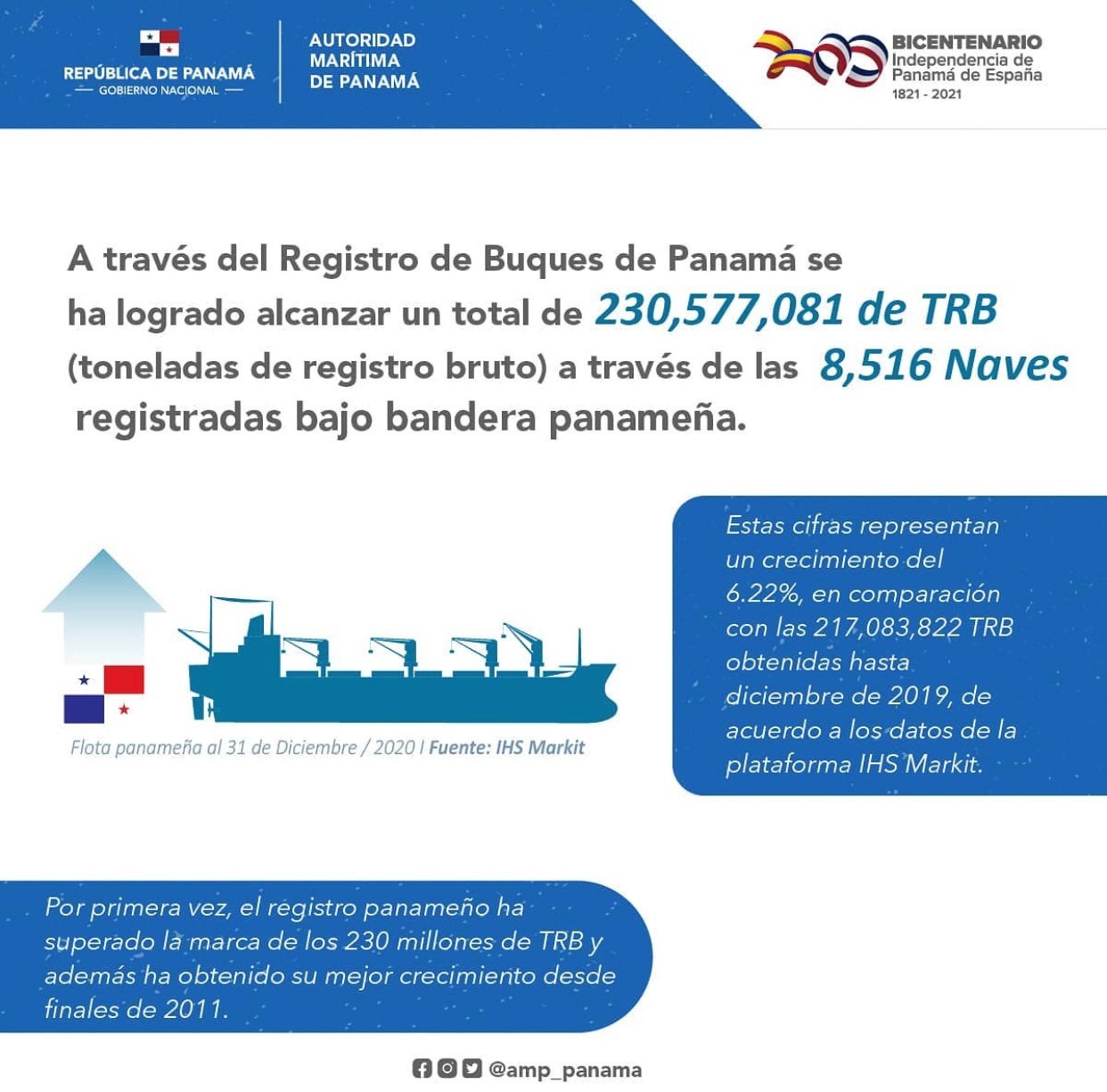 THE AMP, THROUGH THE PANAMA VESSEL REGISTRY, REACHES ITS BEST RESULTS SINCE 2011

In 2020, Panama Maritime Authority (PMA), through the Panama Ship Registry, managed to reach a total of 230,577,081 GT (gross registered tons), with 8,516 vessels registered under the Panamanian flag. These figures represent a growth of 6.22%, compared to the 217,083,822 GT registered in December 2019, according to data from the IHS Markit platform.

For the first time, the Panamanian Registry has exceeded the 230 million GT mark and has also obtained its best growth since the end of 2011, which "makes us feel extremely proud," said Rafael Cigarruista, General Director of Merchant Marine of the Panama Maritime Authority.

It should be noted that the Registry introduced a series of improvements last year, including a complete reengineering of the processes, incorporation of market analysis, characterization of important areas of the sector, and introduction of electronic documents, aiming in this way to improve service and user satisfaction.

"The Panama Ship Registry, despite the global economic slowdown caused by the Covid-19 pandemic, shows positive results. “Considering that there are fewer ships, fewer  new constructions, more competitors and more international enforcements; we have reached a milestone for our Registry”, emphasized Rafael Cigarruista.

Between January and December 2020, Panama, through its Registry, has added 1,033 vessels to its fleet and 29.7 million GT, according to reports from the Panama Maritime Authority. Of this group, 339 vessels correspond to new buildings, contributing 14.3 million GT to the Panama fleet.

The percentage of vessels’ cancellations and transfers to other registries, during 2020 was reduced by 25.8%, a figure that corresponds to the best results obtained in the last 10 years.

The implementation of key actions and the performance of timely analysis have led to positive growth for the Panama Ship Registry.

"We have managed to reduce cancellations due to fleet transfers, a really positive figure since it shows the trust that the shipowners maintain in the services provided by our Registry," Mr. Cigarruista.

According to maritime indicators issued by Clarkson Research Services Ltd., in terms of Gross Tonnage, the Panamanian flag flies more than 16% of the world maritime fleet. These results demonstrate that the legal security offered by the Registry - being backed by a nation -, the 24/7 attention, the level of professionalism and the effort of the human resources have played a fundamental role in  the Registry's growth.

During the most critical months of the pandemic, operations were prioritized with the aim of improving the services provided to users, achieving perfect synergy between the different entities that make up the Panama Ship Registry.

In this way, during the most crucial months of the pandemic, the Public Registry of Ships processed a total of 5,951 documents for registration, such as mortgages, certifications and titles, etc.

In this sense, since April 27, 2020, the issuance of Public Deeds of Naval Titles and Mortgages electronically signed remotely was initiated, as part of the Technical Modernization Plan implemented by this administration. This implementation streamlined/ the process and reduced time, facilitating the receipt of 4,089 documents remotely (68% of procedures), until December 31.

Throughout 2020, the General Directorate of the Public Registry of Ships carried out the preliminary and final registration of 1,742 property titles and 1,425 naval mortgages.

"We will continue to put our best effort and focus on maintaining the sustained growth of the Registry over the next years, making the pertinent decisions for the benefit of our users," concluded the director of the Panama Ship Registry, Rafael Cigarruista.